What doesn’t kill you makes you stronger

I used to tell a joke about March 4th being “Army Day” — get it? — March forth? Anyway, in 1987, all that changed. It was the year of the triple whammo. First my mom died on January 15th, 1987, then one month later, Dad with his Alzeimer’s Disease was placed in a home, then on March 4th, came the third blow.

I was spending the weekend up north at our family cottage with my boyfriend Rejean. We had taken a long weekend to enjoy some cross-country skiing. Relaxing in the afternoon in the living-room with a glass of wine in front of a roaring fire, suddenly I smelt something unusual. Rejean, I said, I smell smoke. I went into the kitchen and looking up to the ceiling, I saw smoke escaping through the ceiling tiles. I screamed to Rejean who opened the door behind the fireplace and saw flames escaping through the back of the fireplace. “The house in one fire”, he said. “Is there something you want to save?” I thought about the photo album I had shown him the week before, but, panic-striken, I couldn’t remember where it was — in the downstairs bedroom cupboard? in the upstairs bedroom cupboard?” “Never mind,” Rejean said, “grab your purse and we’re outta here.” On the way out of the kitchen, I grabbed the phone on the wall and called the fire department. Our skis were leaning against the wall in the kitchen so we pitched them into the snowbank and left the house, wading waist-deep in the snow down the unplowed road to Rejean’s car that was parked at the bottom of the hill.

We drove down the road to the fish hatchery and knocked at our friend Fred’s door. Sobbing, I said, “Fred, my house is on fire” and at that moment I cast one last look to the top of the hill where my house had stood and I will never forget that image of the flames shooting above the tree-line; the image is indelibly imprinted in my memory. 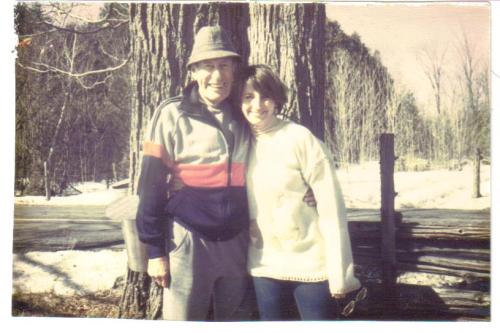 In many different traditions lighting a candle is a sacred action. It expresses more than words can express. It has to do with gratefulness. From time immemorial, people have lit candles in sacred places.

I remember well how in his last days, I kept a vigil at Dad’s bedside, watching him, comatose, taking one breath in, then one breath out, all the while I repeated “I love you Daddy”.

How close I came to lighting a candle by his bedside in his private room in the Centre d’Accueil Alfred Desorchers. What stopped me I don’t know — Mom who had gone before him almost exactly one year before, or Bill who had passed on almost seven years exactly to the month, or my angels and guides who are ever with me? In any event, had I done that, what with Dad being on oxygen, I would have set the whole Home ablaze!

But no, I went home and there by myself, lit a candle and prayed: Daddy, it’s OK; I’m OK, you can go now. I don’t need you anymore; I don’t want you to suffer anymore. Please go to the light. And I slept to be awakened in the middle of the night by the voice of the nurse who said you had better come right away. And I arrived, to find his soul had just left his body. My father was dead. Daddy, I love you immeasurably. You are in my heart and in my soul and in every breath I take.

The Smiley emoticon has a special significance

My late brother was my only sibling and seven years my senior. Bill played guitar in a band when he was a teenager but I couldn’t go to his gigs because I was underage (: Pete played sax, Frank played bass and Lou was their drummer.

Mom, Dad and I were at Bill’s on Christmas Day 1980. I asked him why he was sweating and he said, Oh, it’s just hot in here. In fact he was stoicly covering up the pain he was having from the blood cancer he had been fighting since the previous summer. The day after Christmas, Bill’s girlfriend, Louise called the ambulance. Mom only visited Bill once in the hospital because it was too painful for her to see her son suffer. She also didn’t know the seriousness of his sickness, Bill not having wanted Dad and me to tell her that his doctor had informed him at 38 years of age that he had a year and a half to live.

A few days into his stay, he was transferred to the Palliative care unit, his leukemia having gone into the acute blast stage. Bill asked for morphine but the doctors only prescribed a drug cocktail for pain. On one visit I asked him what I could get him and he weakly said ‘a coffee’. So I brought him a mug of coffee and holding the mug in one hand, he outlined the eyes and upturned mouth with his free hand. Typical Bill, always in good humour no matter what. Even when he was first diagnosed, I would call him to ‘cheer him up’ and he was the one who told me the joke of the day.

On my visit that record-breaking cold day of January 4th, the nurse met me at the door to his room and told me I’d see a big change in Bill, as he had slipped into a coma. Louise and I stayed at his bedside until I thought I’d better call his friend Lou in Toronto to come quickly if he ever hoped to see Bill again. I stepped into the other room to make the long-distance phone call and heard Louise call out. When I went into the room, she said Bill had just died. I saw him take another breath and I ran out to the nurse to come quickly because I thought he was still alive but she said not. That had been his last breath. The priest came into the room and in consolation said stay here and let’s pray. Bill’s soul is still very close to his body and it will give you strength.

I had the task of breaking the news to my parents. I don’t think I will ever have a harder thing to do.

Four years after Bill died, I heard his voice when I was sleeping and he told me what he wanted me to say in the memorial notice I put in the paper.
Dear Mom, Dad and Chris
and all who loved me
Weep not for me;
What is the end of life for the caterpillar;
Is the beginning of life for the butterfly;
And I soar with the eagles. 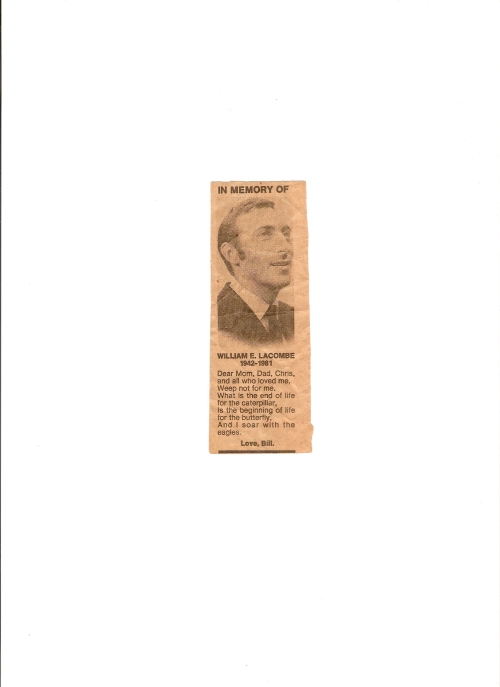 The King is dead; long live the King

My memories of Elvis are inextricably intertwined with the memory I have of my late brother Bill playing “Hound Dog”on his guitar. Oh how I loved, at the tender age of seven, to sit at my idol’s feet — Bill was fourteen at the time — and listen, enraptured, as he sang and played that Elvis golden tune on his beloved guitar.